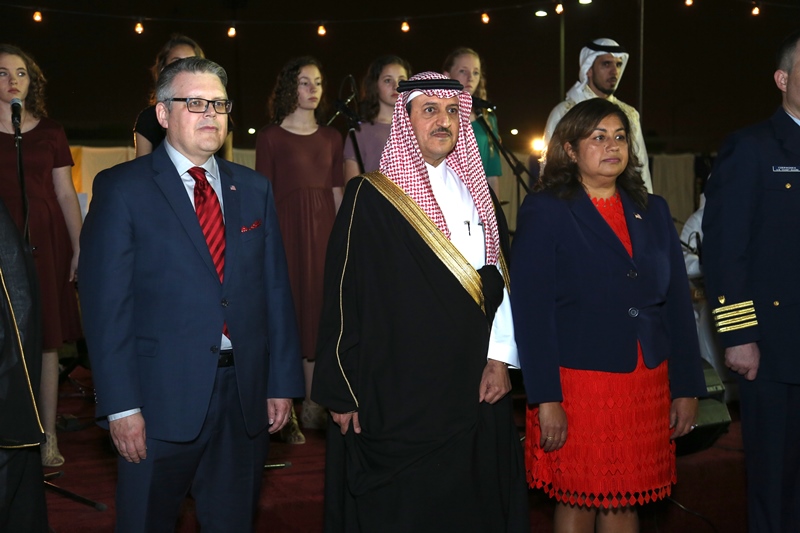 U.S. Consul General Rachna Korhonen and her husband, Juha Korhonen, hosted the 2018 National Day reception at the U.S. Consulate General in Dhahran on February 13, 2018.  Consul General Korhonen welcomed Suliman Al-Thunayan, Governor of Al-Khobar as the guest of honor along with over 400 guests from throughout the Eastern Province.

The following are excerpts from Consul General Korhonen’s prepared remarks:

It has been a little more than 5 months since I arrived to the Eastern Province and I can’t help but keep telling everyone that I have the best job in the best place at the best time.  From the start, the people of Sharqieh have welcomed me and offered their warm hospitality everywhere I have gone.

Many of you have also welcomed me into your homes during weekly diwaniyas.  My husband Juha and I have visited many festivals in al-Ahsa, Abqaiq, Nairiyah, Dammam, and Khobar and we learned so much about Saudi culture.

Through Saudi Vision 2030, Saudi Arabia seeks to diversify its economy and place a new emphasis on entrepreneurship and promoting small and medium-sized Saudi businesses.

A central plank of Vision 2030 is greater access for women to the workplace, which comes on the heels of so many other recent gains women have made in the Kingdom.

As Saudi Arabia goes forward with these changes, the United States will stand with it as a committed partner.  Our relationship with Saudi Arabia extends over 80 years, and our support for achieving shared strategic goals remains as firm as ever.

CG Korhonen, Suliman Al-Thunayan, and Juha Korhonen stand for the performance of the Saudi and U.S. national anthems at the U.S. National Day celebration.