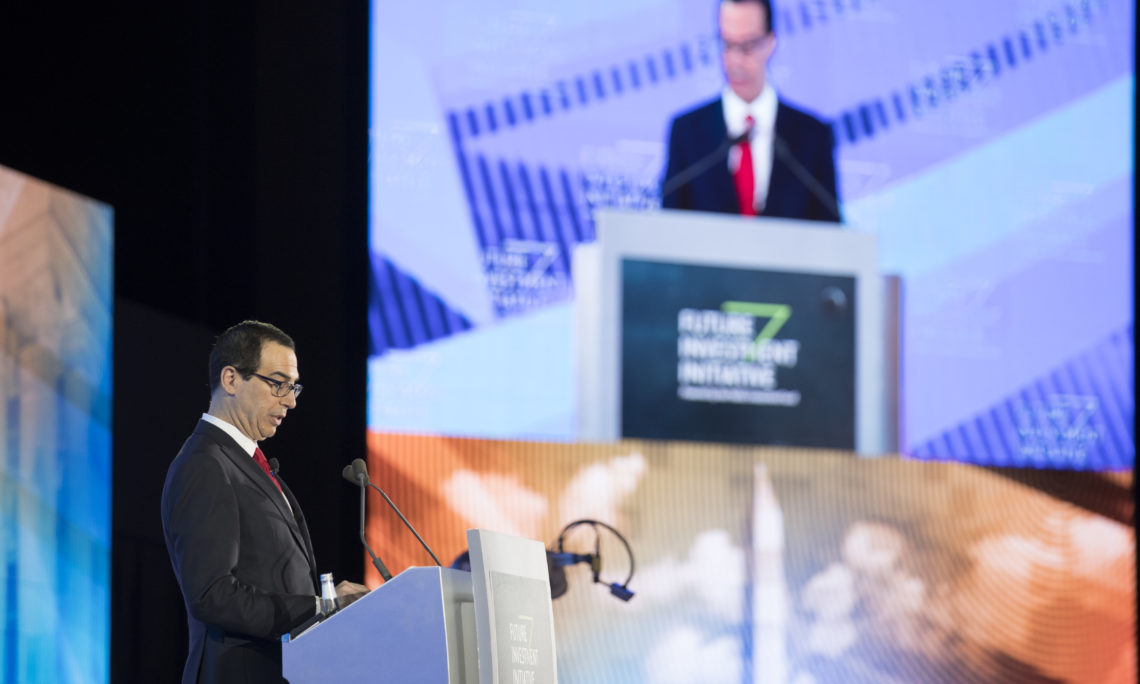 Good Afternoon. Thank you to His Royal Highness, the Crown Prince, and His Excellency, Yasser al-Rumayyan, the Managing Director of the Public Investment Fund of Saudi Arabia, for welcoming our delegation to your country. I am pleased to be here as a follow-up to President Trump’s visit to Riyadh in May and grateful to have the opportunity to address this distinguished gathering of business leaders and policymakers. We arranged this trip so I could speak at this important conference regarding the path towards a more secure and prosperous future for Saudi Arabia and the United States.

I am here in Saudi Arabia to commemorate the opening of the new Terrorist Financing Targeting Center. The Memorandum of Understanding establishing the intent to create the Center was signed during President Trump’s first international trip and the creation of this Center is a major step forward in our ability to disrupt the finances and operations of terrorist organizations.

In 2004, the Office of Terrorism and Financial Intelligence was created within Treasury. This team, with over 700 dedicated employees, is one of the most effective in the world at countering terrorist financing and has pioneered the use of intelligence, sanctions, and other financial tools in support of U.S. national security interests.

Over the years, Treasury has designated thousands of individuals and entities, contributing to U.S. and allied efforts to stop terrorist regimes, disrupt and dismantle criminal organizations, and target those that will do us harm. Sanctions and other Treasury measures, combined with active diplomatic and law enforcement efforts, are central to applying maximum economic pressure to counter a wide range of threats.

We have targeted individuals and entities facilitating funds and procurement in support of North Korea’s weapons program. In September, President Trump authorized Treasury to impose a new range of sanctions on shipping networks that support the Kim regime. We now have the ability to suspend correspondent accounts and freeze assets of any foreign financial institution that knowingly conducts significant transactions in connection with any trade with North Korea. We will use these new tools carefully to cut off flows of funds available to North Korea to pursue its dangerous and destabilizing nuclear and missile programs.

President Trump has made it clear that we will continue to use these economic tools to combat rogue regimes and terrorist organizations.

Individual terror attacks are often the product of an expansive network of fundraisers, recruiters, and operators. We are focused on maximizing the use of our expansive economic authorities, intelligence, and other sources of financial information to target and interrupt the financing of those who execute and facilitate these deadly attacks and other destabilizing activities. We do so in strong partnership with our allies in the region and all over the world. We are committed to working together to stop the use of illicit financing that goes to these dangerous networks.

ISIS has raised hundreds of millions of dollars through the theft of oil, kidnapping, and extortion. Sanctions and targeted operations have been effective in reducing these flows and degrading ISIS’s ability to exploit the international financial system to further its extremist ideology. We are seeing the impact of our efforts on ISIS’s financial strength and its ability to control territory.

Since I have been at Treasury, we have designated individuals and entities tied to Iran’s Islamic Revolutionary Guard Corps, Iran’s ballistic missile program, Iranian support for terrorism, and the regime’s human rights abuses. While I visit other countries in the region this week, I will discuss with our allies opportunities to work together to counter Iran’s threatening activities. This will include a focus on taking aggressive actions against Hizballah, whose main benefactor is Iran. Hizballah poses a threat across the Middle East and beyond and we must jointly use our authorities to disrupt its financiers and financial networks.

We also remain focused on stopping the support networks of terrorist groups in Afghanistan, such as the Taliban. We are working on disrupting the Taliban’s ability to raise funds domestically and abroad.

We are pleased to add to these critical efforts by opening the Terrorist Financing Targeting Center, and to serve as a co-chair of this Center with Saudi Arabia.

The Kingdom is one of our important partners on countering the financing of terrorism. We have curtailed charities that finance Al-Qaeda. We have issued joint designations with Saudi Arabia, targeting the fundraising networks of al-Qaida, Hizballah, the Taliban, and Lashkar-e-Tayyiba. We will continue to look to Saudi Arabia to be a leader on these issues in the Gulf.

Today the U.S. announced new sanctions on nine individuals and entities that finance and facilitate terrorism and are actively supporting violence in Yemen. We coordinated this action with the Kingdom of Saudi Arabia, the United Arab Emirates, the State of Kuwait, the Sultanate of Oman, the Kingdom of Bahrain, and the State of Qatar, who designated these advocates of terror under their own domestic authorities. This is the largest ever multilateral designation in the Middle East.

This bold and innovative multilateral approach is needed because terrorism poses a threat to all of our nations. It is critical that we come together to combat this. For the first time, we are establishing a multinational center to draw on our experiences, tools, and the expertise of member countries. Together, we will focus our efforts and disrupt the financial and support networks that enable terrorists.

I am especially thankful for the leadership demonstrated by my Saudi counterparts, whose efforts as co-chairs and hosts of the Center have been – and will continue to be – instrumental in ensuring its success. This center will be a catalyst for additional multilateral actions against terrorist financiers. It will be a place where member countries come together to share information and benefit from the lessons we have learned in fighting against these common threats.

Our enemies have felt the effects of being blocked from the world financial system. They are finding it harder to raise, move, and distribute money. This will continue as a result of our efforts to evolve our counter-terror tools.

I would also like to discuss Vision 2030. We are here at this conference in Riyadh to help promote a prosperous future for the Kingdom of Saudi Arabia. This is a future beyond oil, with the promises of a diverse and dynamic economy. Saudi Arabia is well-positioned to build this new economy.

Vision 2030 is an ambitious Saudi reform program led by his Excellency, the Crown Prince. It will shift the focus of the economy of Saudi Arabia and its future economic prospects by investing in new industries, new education, and delivering new skills needed for the 21st century. The topics discussed at this Future Investment Initiative will lay out a pathway for the Kingdom’s future success.

Many of the reforms already launched – such as capital markets development, the reduction of subsidies, improved regulations, and better delivery of government services – are the foundations for more diverse and inclusive growth.

As the Kingdom pursues these reforms, I want to discuss other areas that will allow investment growth.

The Saudi Arabian Monetary Authority has been an excellent steward of the economy, the banking sector, and currency issues. Maintaining a sound currency, along with predictability and certainty of monetary policy, are key elements to attracting sustainable and long-term capital investment.

New sources of growth and government revenue will help Saudi Arabia diversify away from its oil economy. This will be accomplished through an expansion into new sectors. The 21st century has presented the world with new frontiers and opportunities for innovation, many of which are being discussed during this conference. Saudi Arabia is in a good position to take advantage of these opportunities with large public and private investments in mining, health care, all types of energy, entertainment, logistics, and other sectors. It is also well-positioned to take advantage of an increase in labor force participation with the inclusion of more women in the workforce.

The Kingdom will be able to increase investments by continuing to develop strong and safe capital markets. Saudi Arabia has already set itself on this course. In the past few years, Saudi Arabia has taken measures to allow foreign investment in the TadawuL, the Saudi Stock Exchange, and measures to align settlement rules with international standards. It also has taken steps to expand new products and investors into the Saudi capital market. The Kingdom is working towards creating a deep, liquid domestic debt market anchored by a sovereign yield curve.

Saudi Arabia has achieved some important milestones since the program’s launch. This includes opening the Tadawul to foreign investors and the first phase of energy price reforms. The United States strongly supports and welcomes Saudi Arabia’s efforts to advance these reforms. We look forward to continued and accelerating momentum, with future milestones including the creation of the Universal Citizens Account to provide support to Saudi families as the economy transitions.

This is a truly impressive group assembled here today. The country’s future has tremendous possibilities and we are excited to be able to partner with them. Open markets, a respect for private property, and the rule of law are essential to thriving economies. As Saudi Arabia continues down this path and presses forward with reforms, we in the United States will be with you.

Just as Saudi Arabia is engaged in a rethinking of your government’s role in your economy, so are we in America in the middle of our own bold new program for reform.

We are focused on the cornerstone of our pro-growth economic program: comprehensive tax reform. It has been over thirty years since we have had comprehensive tax reform in our country. This has hurt our workers, made our businesses uncompetitive, and left trillions of dollars of American business profits offshore. We are working to change this. Our tax reform framework will transform both the personal and business tax codes to make our system simple, fair, and competitive. We are simplifying the process, eliminating special interest deductions, and providing a tax cut for middle income families. We are going to reduce our corporate rate, which is the highest in the developed world.

To complement our work on tax reform, President Trump has directed the Treasury to conduct a thorough review of financial regulations that have made it more difficult for individuals to save and businesses to compete. Over many years, duplicative regulations have piled up, creating unnecessary compliance costs. Each of our recommendations makes sure that financial regulations are consistent with our core principles – ensuring that regulations are efficient, effective, and appropriately tailored.

These reforms, along with tax reform, will put us on a path to sustained prosperity and a return to stronger economic growth in the United States.

The conversations that take place here will help the Kingdom succeed in an evolving, knowledge-based economy. The work that is done to modernize and reform will ensure every Saudi has access to the ladder of opportunity. This will lead to increased prosperity and provide hope and stability for the 21st century.

I applaud comments by the Crown Prince who has provided clarity and leadership on these issues. His call for moderation and openness will lead the country and region to a brighter future. Initiatives like NEOM – a brand new commercial hub in the region – are bold actions that can leave a legacy for future generations.

In conclusion, as I have outlined earlier, I am committed to the success of the Terrorist Financing Targeting Center, which I expect will be one of the critical accomplishments of our Administration in cooperation with our partners in the Gulf. I look forward to returning to Saudi Arabia on an annual basis to personally ensure its success.

Thank you for the opportunity to speak here today and I would like to thank the Public Investment Fund of Saudi Arabia for hosting us.