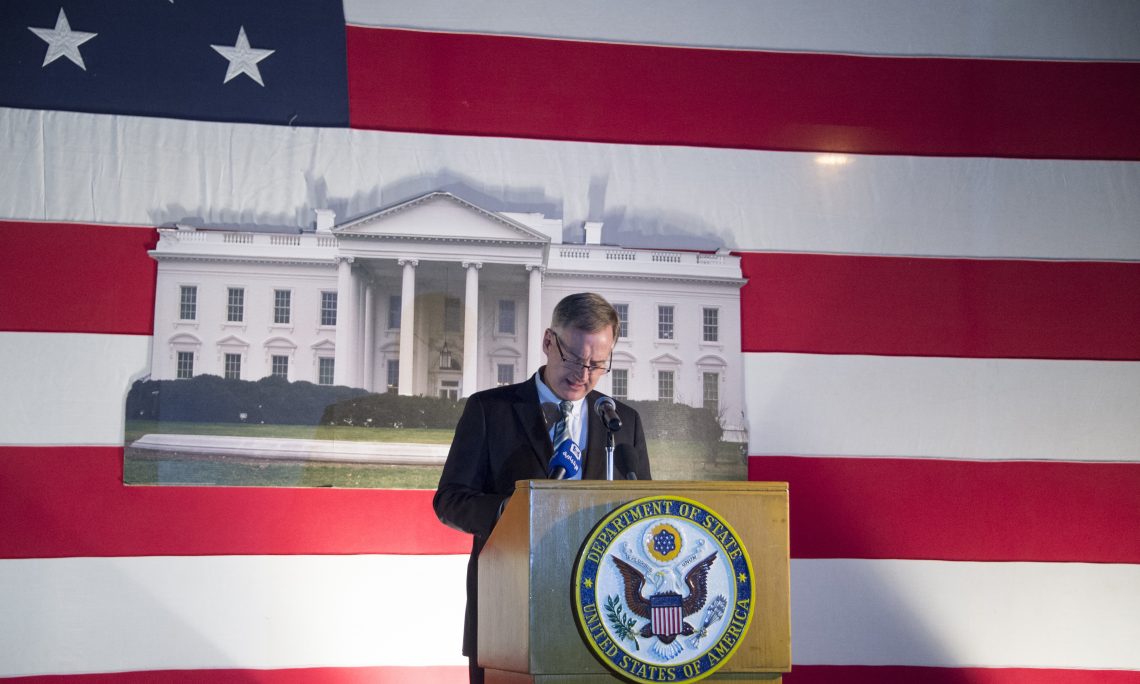 Ladies and Gentlemen, welcome to the American Embassy.  I’m glad that you could join us this evening to watch events taking place today, Election Day, in the United States.

It is the tradition at this Embassy that we mark election night every four years by inviting our friends to share it with us.

The Presidential elections that take place every four years are the most prominent, but by no means the only, means by which the American people participate in government.  There are thousands of election races at all levels of government every year in the United States, for offices ranging from Congress, to state governments, and on down to city officials and local school boards.  To a remarkable extent, most of everyday public life in the U.S. is administered by state and local governments, and not by the federal government.  It is sometimes easy to forget this during the excitement of a Presidential election.

We Americans also sometimes forget that the political order that has evolved in the United States shares power among a number of institutions – including the Presidency, the two chambers of Congress, the judiciary, and the states.  This can sometimes make our government unwieldy, but it also ensures a certain stability.  Tonight Americans are choosing a President, our most prominent public official, but the President is the head of only one of the three branches of our federal government.  There are many officials who will have a say in how the United States government will function in the coming four years.

I mention this because whoever prevails in the election, I am confident that the important partnership between the United States and Saudi Arabia will remain strong.  It is driven by the interests of both countries, and is sustained by the dense network of relationships and cooperation between the two that has developed over the past 80 years.  In just one example of this important partnership, General Dunford, the most senior officer in the American military, is visiting Riyadh tonight.  General Dunford is here continuing the high-level coordination that has long sustained the security relationship between Saudi Arabia and the the United States.

Senior coordination like this is not restricted to the military part of our relationship; rather it is typical of the high-level cooperation between our two governments across a wide range of issues — on critical regional matters, on trade, investment, agriculture, education – in short, throughout a strong and mature relationship that benefits both our countries.  And I am confident that this will continue.

This evening, the news feeds on the televisions here will let us hear commentaries, and view some of the thousands of polling places across the United States where people are voting.  They will be voting for local and state officials, in local referendums, for all 435 seats in the House of Representatives, and for one-third of the 100 members of the Senate.  And of course, for President and Vice President.

Election officials will not release the results of the early ballots until all of the polls have closed, which I believe will not be before 4 a.m. Riyadh time, at the very earliest.  So, although we will not have news of any results at our event here tonight, we can observe, listen to commentary, and share our own speculation about what is happening.  Sometime early tomorrow morning our time –in sha allah – the results should become clear.

Some aspects of the electoral systems in the United States can be difficult to understand, even for Americans.  Each American state sets its own rules for elections.  In some states there are electronic voting machines, in some a paper ballot is marked with an X, and in some places voting takes place by mail.  Many votes have already been cast by absentee ballot.  To help answer questions about the mechanics of voting and other aspects of our political system, Embassy officers are here at tables to the right, behind the partition. I hope you will stop by to speak with them.

Many of us here tonight have been able to observe political systems around the world, and we understand that each society develops its own political culture, shaped by the history and current conditions in each country.

Tonight we will see the American political system, shaped by our history, in action, and we are glad that you, our friends, can be with us to watch it.

And now my colleague Ahmed Al-Masri will provide interpretation