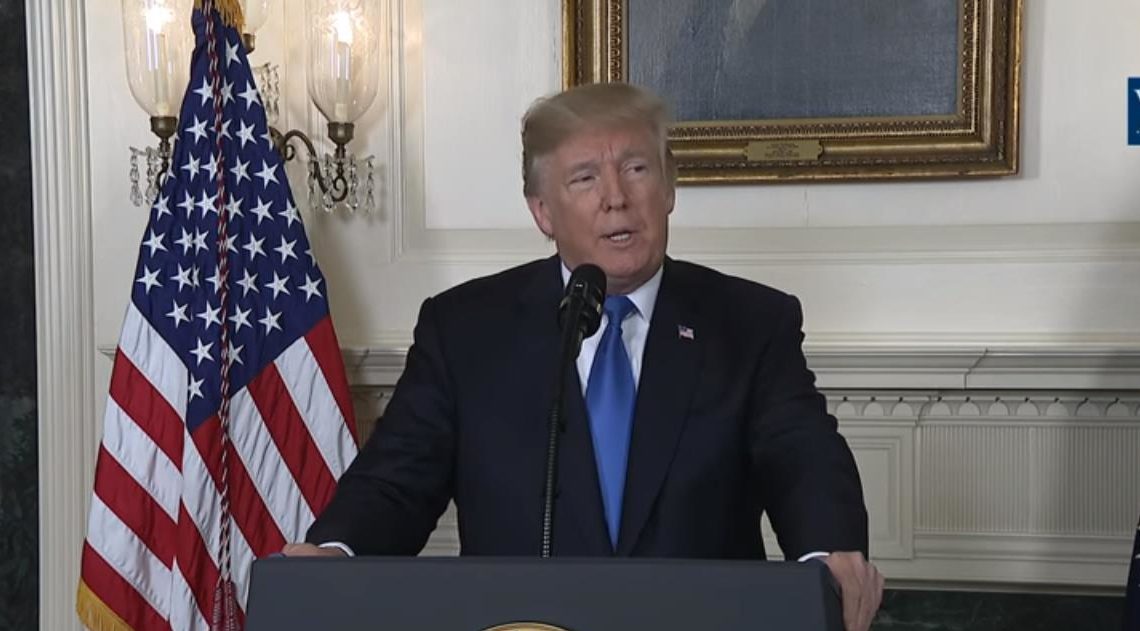 “It is time for the entire world to join us in demanding that Iran’s government end its pursuit of death and destruction.” – President Donald J. Trump

President Donald J. Trump, in consultation with his national security team, has approved a new strategy for Iran. It is the culmination of nine months of deliberation with Congress and our allies on how to best protect American security.

• The United States’ new Iran strategy focuses on neutralizing the Government of Iran’s destabilizing influence and constraining its aggression, particularly its support for terrorism and militants.

• We will revitalize our traditional alliances and regional partnerships as bulwarks against Iranian subversion and restore a more stable balance of power in the region.

• We will work to deny the Iranian regime – and especially the Islamic Revolutionary Guard Corps (IRGC) – funding for its malign activities, and oppose IRGC activities that extort the wealth of the Iranian people.

• We will counter threats to the United States and our allies from ballistic missiles and other asymmetric weapons.

• We will rally the international community to condemn the IRGC’s gross violations of human rights and its unjust detention of American citizens and other foreigners on specious charges.

• Most importantly, we will deny the Iranian regime all paths to a nuclear weapon.

The Nature of the Iranian Regime under Supreme Leader Khamenei

• For 28 years, Ali Khamenei has been Iran’s Supreme Leader. Before that, he held the office of President for 8 years. In that time, he has shaped the Iranian regime in his image.

• Khamenei and the IRGC have pursued a steady policy of spreading a revolutionary ideology aimed at undermining the international system and many states by force and subversion. His main enemy and rallying point has been and continues to be the United States of America, which he calls the Great Satan.

• Under Khamenei, Iran exports violence, destabilizes its neighbors, and sponsors terrorism abroad. Within Iran, under Khamenei’s rule the Iranian government has oppressed its people, abusing their rights, restricting their access to the internet and the outside world, rigging elections, shooting student protesters in the street, and imprisoning political reformers like Mir Hussein Musavi and Mehdi Karroubi.

The Threats from the Iranian Regime

• The reckless behavior of the Iranian regime, and the IRGC in particular, poses one of the most dangerous threats to the interests of the United States and to regional stability.

• The Iranian regime has taken advantage of regional conflicts and instability to aggressively expand its regional influence and threaten its neighbors with little domestic or international cost for its actions.

• This occurred most recently following the emergence of the Islamic State of Iraq and Syria (ISIS) from the vacuum created by the Obama administration’s ill-considered withdrawal from the region.

• The full range of the Iranian regime’s malign activities extends well beyond the nuclear threat it poses, including:

o Material and financial support for terrorism and extremism;

o Support for the Assad regime’s atrocities against the Syrian people;

o Cyber-attacks against the United States, Israel, and America’s other allies and partners in the Middle East;

o Arbitrary detention of foreigners, including United States citizens, on specious charges and without due process.

The Need for a Comprehensive Strategy

• The previous Administration’s myopic focus on Iran’s nuclear program to the exclusion of the regime’s many other malign activities allowed Iran’s influence in the region to reach a high-water mark.

• Over the last decade and a half, United States policy has also consistently prioritized the immediate threat of Sunni extremist organizations over the longer-term threat of Iranian-backed militancy.

• In doing so, the United States has neglected Iran’s steady expansion of proxy forces and terrorist networks aimed at keeping its neighbors weak and unstable in hopes of dominating the greater Middle East. Recently, the Iranian regime has accelerated the seeding of these networks with increasingly destructive weapons as they try to establish a bridge from Iran to Lebanon and Syria.

• The Trump Administration will not repeat these mistakes.

• The Trump Administration’s Iran policy will address the totality of these threats from and malign activities by the Government of Iran and will seek to bring about a change in the Iranian’s regime’s behavior.

• The Trump Administration will accomplish these objectives through a strategy that neutralizes and counters Iranian threats, particularly those posed by the IRGC.

• Supreme Leader Khamenei’s primary tool and weapon in remaking Iran into a rogue state has been the hardline elements of the IRGC.

• The IRGC’s stated purpose is to subvert the international order. The IRGC’s power and influence have grown over time, even as it has remained unaccountable to the Iranian people, answering only to Khamenei. It is hard to find a conflict or a suffering people in the Middle East that the IRGC’s tentacles do not touch.

• Unaccountable to Iran’s elected leaders or its people, the IRGC has tried to gain control over large portions of Iran’s economy and choke off competition, all the while working to weaken and undermine Iran’s neighbors and perpetuate the chaos and instability in which it thrives.

• The IRGC has armed Bashar al Assad and guided his butchering of his own people in Syria and has cynically condoned his use of chemical weapons.

• The IRGC has sought to undermine the fight against ISIS with the influence of militant groups in Iraq under the IRGC’s control.

In Yemen, the IRGC has attempted to use the Houthis as puppets to hide Iran’s role in using sophisticated missiles and explosive boats to attack innocent civilians in Saudi Arabia and the United Arab Emirates, as well as to restrict freedom of navigation in the Red Sea.

• The IRGC has even threatened terrorist attacks right here at home. Senior IRGC commanders plotted the murder of Saudi Arabia’s Ambassador to the United States, Adel Jubeir, on American soil in 2011. But for exceptional work by our law enforcement and intelligence officers to detect and disrupt this egregious act, the IRGC would have conducted this terrorist attack and assassination in our own capital and would have killed not only a Saudi Arabian diplomat, but a host of other innocent bystanders at a popular restaurant in Washington, D.C.

• The IRGC, which repeatedly displays reckless hostility and disregard for the laws and norms that underpin the international order, threatens all nations and the global economy.

• For all these reasons, we want to work with our partners to constrain this dangerous organization, for the benefit of international peace and security, regional stability, and the Iranian people.

The Iranian Nuclear Program and the Joint Comprehensive Plan of Action

• The Iranian regime’s activities severely undercut whatever positive contributions to “regional and international peace and security” the Joint Comprehensive Plan of Action (JCPOA) sought to achieve.

• Even with regard to JCPOA itself, the Iranian regime has displayed a disturbing pattern of behavior, seeking to exploit loopholes and test the international community’s resolve.

• Iranian military leaders have stated publicly that they will refuse to allow International Atomic Energy Agency (IAEA) inspections of their military sites. These statements fly in the face of Iran’s commitments under JCPOA and the Additional Protocol. Not long ago these same organizations hid nuclear facilities on military sites.

• This behavior cannot be tolerated; the deal must be strictly enforced, and the IAEA must fully utilize its inspection authorities.