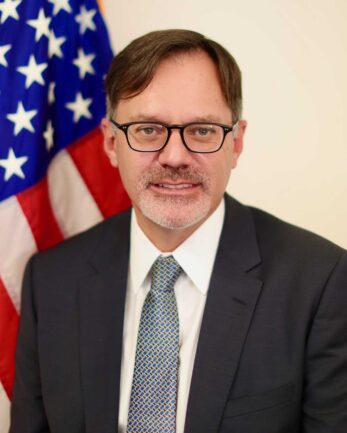 Denison “Denny” Offutt holds the rank of Minister Counselor in the Foreign Service and will be Deputy Chief of Mission at the U.S. Embassy in Riyadh, Saudi Arabia.  He served as Chargé d’Affaires at the U.S. Embassy in Lima, Peru, from March 19, 2020 until March 10, 2021. Mr. Offutt assumed the role of Deputy Chief of Mission in September, 2019 after having served as Mission Peru’s Consul General.

Prior to Peru, Mr. Offutt served as the National Security Council’s Director for Canada and Mexico following a year at the National Defense University’s Eisenhower School.  He has served domestically as a Special Assistant to the Under Secretary for Management, the Coordinator for the Operations Center’s Office of Crisis Management and Support, and as a Foreign Affairs Officer in the Office of Mexican Affairs.