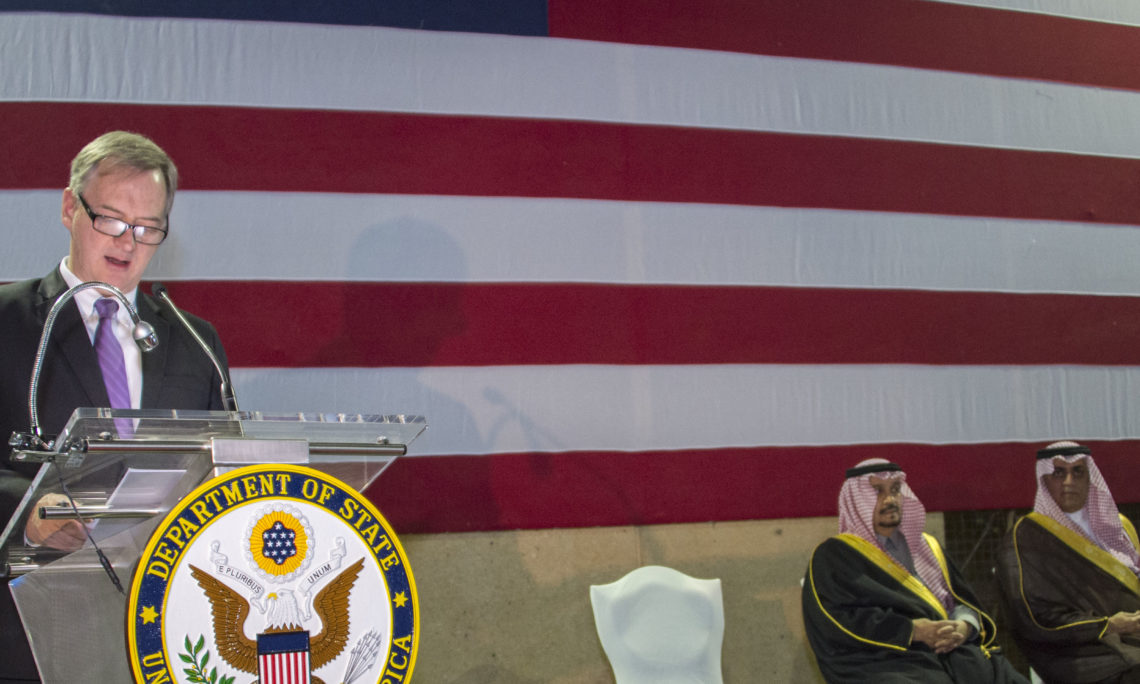 On February 12, 2018, Chargé d’Affaires Christopher Henzel hosted Governor of Riyadh Region His Royal Highness Prince Faisal Bin Bandar Bin Abdulaziz Al Saud, distinguished Saudi officials, and a number of guests to celebrate the 242nd year of the independence of the United States of America.  The reception was held at Quincy House, the official residence of the U.S. Ambassador to Saudi Arabia.

At the event, Mr. Henzel delivered the following remarks:

Welcome, and thank you for joining us this evening to celebrate the 242nd birthday of the United States.  I especially want to welcome the Governor of Riyadh, His Royal Highness Prince Faisal bin Bandar bin Abdulaziz Al Saud, as well as our many sponsors with us tonight.

The year 2017 witnessed remarkable developments in the relationship between Saudi Arabia and the United States.  Saudi Arabia welcomed our President to Riyadh – the first stop of his first overseas trip as President – which brought together 55 heads of state at the Arab-Islamic-American summit.  During the visit, defense and commercial agreements worth billions of dollars were signed, further strengthening the partnership between our two countries.  This visit – and those of the many other senior American delegations that regularly travel to Saudi Arabia – make clear that our two countries continue to face challenges together in a spirit of cooperation and friendship.  That partnership – based on shared fundamental interests in economic prosperity, security, and stability – is important for the region and for the world.  I want to take a moment to highlight some of many aspects of the strong U.S.-Saudi partnership:

The Saudi government’s plans for the further development of the Kingdom continue at an impressive rate. The United States is strongly supportive of Saudi Arabia’s ambitious goals.  As the Saudi Arabian government implements its vision, we believe that both sides will continue to benefit from our unique bilateral relationship, and that that partnership will continue to grow.

Your Royal Highness, excellencies, ladies and gentleman, I hope you will enjoy the wonderful food tonight prepared by the Ritz-Carlton and enjoy the company of our many esteemed guests.

So again, a warm welcome to this year’s celebration, and I hope you enjoy the evening.

Members of the U.S. Marine Corps present the American flag at the U.S. National Day celebration.